My Hands Came Away Red by Lisa McKay * A Review

ABOUT MY HANDS CAME AWAY RED
Cori signs up to take a mission trip to Indonesia during the summer after her senior year of high school. Inspired by happy visions of building churches and seeing beautiful beaches, she gladly escapes her complicated love life back home. Five weeks after their arrival, a sectarian and religious conflict that has been simmering for years flames to life with deadly results on the nearby island of Ambon. Within days, the church building the team had constructed is in ashes, its pastor and fifty villagers are dead, and the six terrified teenagers are stranded in the mountainous jungle with only the pastor's teenage son to guide them to safety. Ultimately, Cori's emotional quest to rediscover hope proves as arduous as the physical journey home. 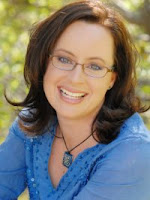  ABOUT LISA MCKAY
Lisa still stumbles when people ask her about home. Raised in Australia, Bangladesh, the States, and Zimbabwe, she has also lived in Indonesia, the Philippines, and Croatia. She is currently living in Laos.

(How she got to Laos is a long story that began with writing letters to someone in Papua New Guinea named Mike and ended in marriage about a year later.)

In Australia, Lisa worked as a forensic psychologist with the police, in a maximum security men's prison, and on a child death review team. In Croatia, Lisa worked with a development organization as a stress management trainer. In Indiana, Lisa earned a masters degree in International Peace Studies at Notre Dame University. In Los Angeles, Lisa directed the Headington Institute's training and education programs, providing psychological and spiritual support services to humanitarian workers around the world. In Laos, while Mike is hard at work for a humanitarian organization, Lisa lies in a hammock by the Mekong River and drinks mango smoothies.

Well, sometimes, anyway. The rest of the time she is writing or working as a consultant. Lisa's first book, my hands came away red, was nominated for a Christy Award. Her essays and articles have appeared in a number of different magazines. She is currently working on her second book.
www.lisamckaywriting.com

MY REVIEW
This is the first book I’ve read by Lisa McKay and I really loved it. It was just astonishing. I was completely engrossed in My Hands Came Away Red. If I didn’t know better I would have believed this to be a true story. It was so captivating.
This book was published in 2007 and the next year it was a Christy Award Finalist. Even though it is an older book it still is of great magnitude and needs to be read.  It makes you think about your cozy little life and you realize so many people are fighting for their faith, for food, shelter and just life.
My Hands Came Away Red is full of suspense, faith, never giving up attitude, friendship and such realism. It is an unforgettable story.
I was quite moved by this wonderful novel and wish it didn’t have to end. I really became attached to the characters and they become friends. If a book does that than you know it’s super.
My Hands Came Away Red is one of my favorites of 2012 and I will be looking for Lisa’s next book to read and review.
I highly recommend this book and just love it. It will make a wonderful gift for yourself or someone else.

Hi there! I always enjoy your posts. Tomorrow I will be giving you a special award on my blog at www.deborahvogts.blogspot.com Enjoy!

Beautiful review! Another book happily added to my TBR... :-)