Heart of Ice by Lis Wiehl with April Henry * A Review

Elizabeth Avery is a stunningly beautiful woman. But her perfectly managed exterior hides the ice cold heart of a killer. She ingeniously manipulates everyone who crosses her path to do exactly as she wishes--from crime reporter Cassidy Shaw, who thinks Elizabeth is her new best friend, to a shy young man Elizabeth persuades to kill for her.

As Elizabeth leaves a trail of bodies in her wake, Federal prosecutor Allison Pierce and FBI agent Nicole Hedges must piece together clues from seemingly unrelated crimes. Can they stop her before she reaches her unthinkable, ultimate end-game? 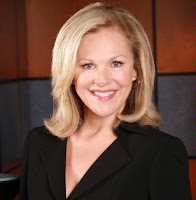  ABOUT LIS WIEHL
Lis Wiehl is a Harvard Law School graduate and former federal prosecutor. A widely popular legal analyst and commentator for the Fox News Channel, Wiehl appears regularly on The O'Reilly Factor and was co-host with Bill O'Reilly on the widely-syndicated radio show, The Radio Factor, for the past seven years. April Henry has written seven mysteries and thrillers. Her books have been short-listed for the Agatha Award, the Anthony Award, and the Oregon Book Award. Two have been chosen for BookSense. April lives in Portland, Oregon, with her husband and daughter.

ABOUT APRIL HENRY
I write mysteries and thrillers. I live in Portland, Oregon with my family.
When I was 12, I sent a short story about a six-foot tall frog who loved peanut butter to Roald Dahl, the author of Charlie and the Chocolate Factory. He took it to lunch and showed it to the editor of an international children's magazine - and she asked to publish the story! (For no money, which might have been a warning about how hard it is to make a living writing.)

My dream of writing went dormant until I was in my 30s, working at a corporate job, and started writing books on the side. Those first few years are now thankfully a blur. Now I'm very lucky to make a living doing what I love. I have written ten novels for adults and teens, with more on the way. My books have gotten starred reviews, been picked for Booksense, translated into four languages, been named to state reading lists, and short-listed for the Oregon Book Award. And Face of Betrayal, which I co-wrote with Lis Wiehl, was on the New York Times bestseller list for four weeks in 2009.

I also review YA literature and mysteries and thrillers for the Oregonian, and have written articles for both The Writer and Writers Digest.

Heart of Ice (co-written with Lis Wiehl) came out in early April. And a teen thriller, The Night She Disappeared, will be published in January 2012.


MY REVIEW
Heart of Ice by Lis Wiehl with April Henry is an excellent thriller. It will keep you reading far into the night, if you dare.
It was amazing to me in this story how Elizabeth didn’t seem to have any feelings or heart for anyone, but herself. She uses and abuses people everywhere she goes. I like how you know exactly who did the killings and why in this book. It isn’t a book where you have to guess who did it because you already know.
The three ladies called the Triple Threat Club are just fantastic. They have issues and things going on in their lives, but keep up with their work and do a brilliant job. Then when one of the ladies from the triple threat club falls into a trap of being a friend to the killer and not knowing what is going on is mind-blowing.
I was astonished at the many different deceits and evil ways Elizabeth found to treat others. The title of the book Heart of Ice suits Elizabeth to a tee.
The characters are quite believable, even though I hope to never meet anyone like Elizabeth. What a cunning, horrible person she was. Was it because of the way she was brought up or did she just enjoy being an evil, deceiving person and watching people suffer?
This is a new author to me and one whom I will look for her other books. Would love to read more from Lis Wiehl and April Henry.
I would recommend this wonderful book for all of you lovers of mystery and crime books.


Disclosure of Material Connection: I receive books free from Thomas Nelson Publishers as part of their Book Review Blogger program/BookSneeze. I am not required to write a positive review. The opinions I express are my own. This is true of any book I review for any publisher or author; I will not review books where a positive review is required and I will always express my own opinions of each book received and read.