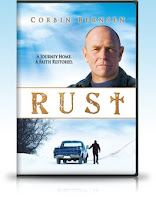 A Journey Home.
A Faith Restored.
As a midlife crisis of faith rocks his life's calling, former minister Jimmy Moore returns to his small hometown to find it reeling from a recent tragedy. Can he get to the bottom of this mysterious fire and clear his boyhood friend Travis?

A unique story of friendship and calling, RUST may well be Corbin Bernsen's most personal project to date. Funded by and set in the real-life Canadian town of Kipling, Saskatchewan (and featuring local citizens in prominent roles), RUST was inspired by the spiritual journey that Corbin has been traveling since his father's death in 2008.


CORBIN BERNSEN (James Moore)
Corbin Bernsen wrote, directed, and stars in RUST, perhaps his most personal film to date. He currently stars as Henry Spencer on the USA Network's hit original series "Psych." Corbin was catapulted to stardom by

the 1980s' hit NBC TV show "L.A. Law," playing Arnold Becker. During the show's run, he appeared on more than 50 magazine covers, earned both Emmy and Golden Globe nominations, and hosted "Saturday Night Live." He has also appeared on "Seinfeld" and "The Larry Sanders Show." Among his feature films, he's starred in Hello Again, Disorganized Crime, Shattered, and as the Cleveland Indians' third baseman-turned-owner Roger Dorn in the popular Major League series of films. Among his many other film credits: the 2001 Christian-themed Judgment, Tales From the Hood, and The Great White Hype. Corbin also appeared with Robert Downey Jr. and Val Kilmer in Kiss Kiss Bang Bang. Corbin lives in Los Angeles with his wife, actress Amanda Pays, and their four sons.

Allen Warner was born in Kipling, Saskatchewan, Canada. As a child, Lloyd spent his time at the family farm where he learned various skills. Lloyd continues to hone these skills, repairing old computers, stereos, and bicycles. Lloyd landed a principal role in RUST playing Travis, one of the key characters in Corbin Bernsen's screenplay. When asked how he became an actor, Lloyd says, "I was sitting in the hotel having a coffee. Someone said I should go and audition. They were joking. I thought to myself, why not?" And the rest is cinematic history. Lloyd is currently an employee of SeedHawk Inc. and is patiently awaiting his next film role. Learn more about Lloyd's incredible journey in this behind-the-scenes video

as had a lifetime of careers, friendships, and opportunities to celebrate including his most recent role in RUST as the father of Corbin Bernsen's character. He is better known for his honest and rewarding 45-year farming career, his partnership with P.M.U. farmers (renting his mares), operating a grain elevator in Windthorst, and his eight years of service on the School Board. "I don't believe that I did anything great in life, but sometimes the small stuff can be great, I suppose. If you concentrate on doing for someone else, good things will come back to you." Frank and his wife of 50 years have eight children and 24 grandchildren. As for his "Hollywood" debut, he thought his audition was iffy, but Corbin saw the perfect person for the role of Glen.

HN G. HUTCHINSON (Pastor Barrow)
You could say Rev. John G. Hutchinson was born to play the role of Pastor Barrow in RUST. Naturally, it was an easy fit. John was born, raised, and educated in Calgary, Alberta, Canada and has been in Christian ministry for 56 continuous years. At various times, he has been a pastor, youth worker, missionary, evangelist, Bible College teacher, conference speaker, and inter-denominational leader. From 1955 to 1966, Rev. John and his family spent two 5-year terms serving in India with Youth For Christ International.


Order Rust here
My Review
Rust is a wonderful movie of a man {who is a preacher} that thinks God isn’t listening to him and he feels alone and goes home to try and figure out his life. His home is in Kipling, Canada-a real town. A tragedy has happened there, a family has been killed in a house fire and a man with learning difficulties said he started the fire, but James his boyhood friend doesn’t think he did it.
Now James has a mission to find out the truth and hopefully help his friend and in the process finds his faith.
This is a really neat movie. I always watch the special features, because it gives me so much more information about the movie. I love to get to know that actors better and see what all was involved in the making of the movie. The special features on Rust were extra special. I found out all of the actors/actresses were just town people none of them are actors except Corbin Bernsen of course. All of the actors did a superb job, with the exception of one, Audrey Tennent who played Corbin‘s sister, Mary. I’m not cutting her down, she’s just not an actress and I thought her lines were to stiff. Even through I still love this movie and you will also. I was amazed at the acting ability of Lloyd Warner who plays the part of Travis. Like the movie Lloyd has learning difficulties. Frank Gall played as Corbin’s dad and did an excellent job. I also was touched and amazed at the job John Hutchinson did as the Pastor in the movie. He also is a real minister. Great actor.
You will be surprised at all of the different twists this movie has. I was astonished at the ending. I never would have guessed it. Such a wonderful, touching inspirational movie that I highly recommend.

This DVD sounds great. Thanks for giving it away. Would enjoy watching this.
plhouston(at)bellsouth(dot)net

This movie would be great to watch with my family! Thanks for offering it as a giveaway!
God bless!
charsaltz at yahoo dot com

Sounds like a highly inspirational movie. Please count me in.

thanks for the giveaway.

Hi Wanda, This sounds like a good movie and would love to win it. :)

We posted about this giveaway at Winning Readings: http://winningreadings.blogspot.com/2010/10/rust-dvd.html

I would love to win this please! Thanks!

Please enter me. I would so love to win this DVD. Thanks!

would enjoy watching this dvd...thanks for the chance :)

Ooh I hope 10 is my lucky number! this looks great! thanks!

This sounds like a wonderful movie. Please include me! Thanks for the chance.

Sounds fantastic, Trinity. Would love to win it & appreciate you offering the opportunity. Thanks for all the good reviews you post. :)

Count me in! sounds great

thanks
dcf_beth at verizon dot net

Please consider me entered! This DVD looks FABULOUS! Thanks for the chance!

Would like to be entered. Don't think I've heard of this movie before...

Thanks!
ohiobuckeye91 (at) gmail [dot] com

I would love to win a copy of this movie. I have seen it listed in several places as a great movie to view.
wmmahaney(at)att(dot)net

I love good Christian movies, especially when based on someone's personal life. Please add me.
desertrose5173 at gmail dot com

I would love to watch this with my family, it is so hard to find GOOD shows and your review really made me want to see this. thank you!
tattgiff at centurytel dot net

This sounds like a great movie to see how others in ministry deal with mid-life situations. Sort of sounds "close to home" if you know what I mean! Thanks for offering this.

I posted a comment but forgot to leave my e-mail...ooops! Love to watch a good, wholesome film dealing with families in ministry. Sorta sounds close to home. Thanks Wanda
wpitts@columbus.rr.com

Please enter me in the contest-love to win
thanks
aunteegem@yahoo.com

I would love to win this for my husband!

This sounds like a great movie,and with a positive message. Please enter me into your giveaway. sold_out_jesus_freak (at) yahoo (dot com)

I think this would be a great movie for family movie night thanks for the chance eaglesforjack@gmail.com