The Least Among You DVD Review 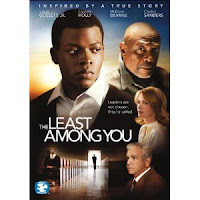 My Review :
This is an excellent DVD. I like movies that are based on true stories and this one didn’t disappoint me. “The Least Among You” was set in 1965, It tells the story of Richard Kelly -Cedric Sanders-, he's sent to an all-white seminary for 2 semesters as part of his probation at his mom's suggestion. One person who really helped Richard was a humble caretaker, Samuel Benton-Louis Gossett, Jr- The acting is magnificent.
Kate Allison-Lauren Holly- played a troubled teacher that once was a missionary. She has something in her past that is making her so sad. Parts of this wonderful movie will bring you sadness, joy, tears and leave you in awe.
To me it is so sad that people were treated so badly and it wasn’t so long ago either. It should make us think what kind of people were we or are now. This movie will really get you to thinking and tell you even one person can make a difference if you only try.
I highly recommend this for your collection. We watched it twice already and have only had it a couple of days. Wonderful movie with brilliant actors.


About the DVD:
Leaders are not chosen, they are called. Inspired by a true story. Richard Kelly (Cedric Sanders) is a black college graduate forced to serve probation at an all-white seminary after the 1965 Watts riots. Richard is encouraged by the seminary president, Alan Beckett, to break the color line. Richard nears his breaking point when he meets Samuel (Louis Gossett, Jr.), an elderly janitor who lives in the basement of his dormitory. As Samuel guides Richard through the trials of racism and the personal life that haunts him, Richard undergoes a transformation that forces him to choose between his dreams and his destiny.


Disclosure of Material Connection: I receive books free from Thomas Nelson Publishers as part of their Book Review Blogger program/BookSneeze. I am not required to write a positive review. The opinions I express are my own. This is true of any book I review for any publisher or author; I will not review books where a positive review is required and I will always express my own opinions of each book received and read.

Labels: DVD Review, Lionsgate, The Least Among You

We love true stories too....looking forward to seeing this one. THanks for letting us know about it! Blessings,