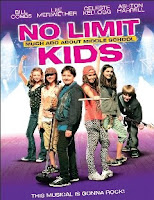 THIS MUSICAL IS GONNA ROCK No Limit Kids centers around a group of young teens entering middle school for the first time. Full of questions, doubts and fears, they band together to form a club in an old abandoned theater on main street. Inside, they not only discover an interesting piece of their town's history, but also a homeless man named Charlie, who connects with the kids through their mutual outcast status and passion for the theater. When the teens learn the theater is scheduled to be destroyed, they set out on a mission to save the town's landmark and Charlie's safe haven. Needing to raise money to save the building, they decide to put on a modern day version of Shakespeare's "Much Ado About Nothing" and through mistaken identities and false assumptions, the group learns you can't always judge a book by its cover. With a story that focuses on treating other with respect, standing up for what you believe in and being true to yourself, "No Limit Kids delivers an uplifting message for the entire family that will speak to all generations.
http://www.nolimitkidsmovie.com/
Format: Color, DVD
Region: Region 1 (U.S. and Canada only. Read more about DVD formats.)
ASIN: B003OTNOZM

Meet 16 year old Celeste Kellogg from Virginia. Celeste has been singing and dancing for

as long as she can remember.

She started performing at the age of 6 in her church choir. At age 12, Celeste found herself performing with the Radio Disney Tween Pop Group “RD7” While with Radio Disney, Celeste opened for the Jonas Brothers, Raven and performed hour long shows at The Kelly Clarkson Addicted to Love Tour, Cheetah Girls, and Miley Cyrus concerts.
http://celestekellogg.com/index.html

Ashton Harrell is a 13 year old boy who started singing before he could talk! (or so it seemed) His first singing experience on stage was at the young age of 4 when he asked his mother if he could go on stage at a local amusement park and sing “Take me Home Country Roads” karaoke in front of hundreds of people. He ran up and sang it word for word even though he couldn’t hardly read. And that was where the seed to perform was planted.
While Ashton sang and acted in several plays and talent shows from the ages of 4 til 9, and appeared in several commercails, His big break came when is was ten. He auditioned and made a Radio Disney group callled RD7.
From 2006-2007 Ashton had the privalege to tour for Disney and opened for major recording artists such has “The Jonas Brothers”, “Kelly Clarkson”, “Miley Cryus”, “The Cheetah Girl’s”, and “Raven”.
http://www.myspace.com/ashtonharrellsings 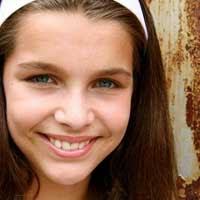 AMANDA WATERS began her film career with the role of "Polly," Mandie's best friend in Mandie and the Secret Tunnel. She followed that with the lead role in Becoming Jesse Tate. Prior to her film work, Amy appeared for several years in numerous industrial videos, commercials, plays, and music videos.

In her favorite print job, Amanda portrayed "Laura Ingalls" for the 75th anniversary cover of Harper Collins' Little House on the Prairie book series. She currently performs in the role of "Samantha" for an on-going video series produced by Lifeway Publishing, which is seen by audiences around the world. In her free time, Amanda loves to dance, swim, enjoy time with friends, and buy shoes.

as born and raised in Cleveland, Ohio, where his parents were hard-working people, who instilled in him a sense of self-reliance and humility. As an amateur actor in the city's Karamu House Theater, he starred in the Ossie Davis play "Purlie Victorious". Cobbs was an Air Force radar technician for eight years; he also worked in office products at IBM and sold cars in Cleveland. In 1970, at the age of 36, he left for New York to seek work as an actor. There he turned down a job in the NBC sales department in order to have time for auditions. He supported himself by driving a cab, repairing office equipment, selling toys, and performing odd jobs. His first professional acting role was in "Ride a Black Horse" at the Negro Ensemble Company. From there he appeared in small theater productions, street theater, regional theater and at the Eugene O'Neill Theater. His first television credit was in "Vegetable Soup" (1976), a New York public television educational series, and he made his feature film debut in The Taking of Pelham One Two Three (1974) in 1974. In his free time Cobbs enjoys music, reading, and playing his drums.

No Limit Kids: Much Ado about Middle School is a great DVD. I was captured right from the start and was entertained all the way through. No Limit Kids: Much Ado about Middle School is about a group of outcast middle school students, whom become friends and want to save a old theater from being destroyed.
Going to a new school is always hard, but when you have personal problems in the home or are not one of the popular students it can be worse. It will bring back memories for the adults of there middle school years. It also will give future middle schoolers the confidence that they will do well and have lots of fun in school.
This DVD not only will be loved by the young, but also adults will find it very entertaining and helpful with their own children.
Celeste Kellogg and Ashton Harrell are very talented young people. They sing many songs on the DVD that are magnificent. Both of these young people have been on many other shows, movies and concerts. It is great to see young people who are not afraid to show others that you don’t need to have sex in your movies or songs. No Limit Kids: Much Ado about Middle School is well put together and has outstanding actors and actresses.
This DVD is highly recommended by Dove Foundation for being suitable for all ages. I also highly recommend this DVD, for family viewing and lots of fun entertainment.

This DVD was given to me from Katie at Propeller Pure Flix Entertainment for viewing and reviewing purposes.

I have not heard of this one before. Sounds like a good one to get for my Granddaughter. Thanks. Blessings, Connie Sue