The Queen by Steven James*A Review

THE QUEEN
The Bowers Files, Book 5
“A masterpiece of a thriller.”—Special Agent R. Wayne Smith, FBI (retired)
While investigating a mysterious double homicide in an isolated northern Wisconsin town, FBI Special Agent Patrick Bowers uncovers a high-tech conspiracy that ties together long-buried Cold War secrets with present-day tensions in the Middle East. Amid the hazardous winter weather and harsh landscape, Bowers must piece together the puzzle before it’s too late.
In his most explosive thriller yet, bestselling author Steven James delivers a pulse-pounding, multi-layered storytelling tour-de-force that will keep you guessing.
The Queen is a breathless thriller from the author Publishers Weekly calls a “master storyteller at the peak of his game.” 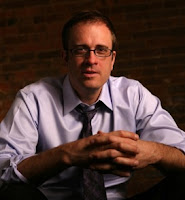  
THE AUTHOR
Steven James has penned 30+ books spanning the genres of psychological thrillers, prayer collections, dramas, monologues, a nine book series on creative storytelling, YA fantasy, and inspirational nonfiction.
He has received wide critical acclaim for his work including four Storytelling World Honor awards, two Publishers Weekly starred reviews, and 2009 and 2011 Christy Awards for best suspense. His latest thriller, The Bishop, was named both Suspense Magazine's and The Christian Manifesto's 2010 Book of the Year.
Steven earned a Master’s Degree in Storytelling from ETSU in 1997 and is an active member of International Thriller Writers, the Authors Guild, Mystery Writers of America, and International Association of Crime Writers. He is a contributing editor to Writer's Digest, and has taught writing and storytelling principles on three continents.
He lives in the foothills of the Smoky Mountains of Tennessee with his wife and three daughters. When he's not writing or speaking, he's rock climbing, playing disc golf, or (shh....) slipping away to a matinee.
http://www.stevenjames.net/

MY REVIEW
This is book 5 in Steven James’ Patrick Bowers series, The Queen. Steven is a great storyteller and I thought I knew who the main criminal, Valkyrie was, but was I wrong.
The Queen is a really long book it has 516 pages and 104 chapters. I thought it would take a long time to read, but got it done in a couple of days, because it is so good.
This is a very exciting psychological suspense book and it’s not for the squeamish. Steven James does not hesitate to explore evil and tries to honestly portray the fractured nature of man.
The whole book was amazing, but I really loved the ending. There were so many things going on, so much drama and suspense that I couldn’t put the book down if I wanted to. The details and wording are perfect. Steven James knows exactly what he is talking about and has a very fascinating way of expressing himself.
I like that it was written in the state of WI where I was born and raised and I knew the cities he spoke of in The Queen. The snow and cold brought back many memories for me.
Also besides all of the suspense, I like how Patrick and his daughter Tessa gets along and love each other. Another sweet part is how Patrick and Lien-hua have fallen in love.
This book isn’t for everyone, but it is fantastic if you love suspense and fast-paced thrillers.
Highly recommended for an exciting read.

I received my free copy from Donna Hausler from Revell, a division of Baker Publishing Group for my review. I was not required to write a positive review. The opinions I have expressed are my own. I am disclosing this in accordance with the Federal Trade Commission's 16 CFR, Part 255