A Brutal Murder. An Unraveling Conviction

In Pattern of Wounds, it's Christmas in Houston, and homicide detective Roland March is on the hunt for a killer. A young woman's brutal stabbing in an affluent neighborhood bears all the hallmarks of a serial murder. The only problem is that March sent the murderer to prison ten years ago. Is it a copycat -- or did March convict the wrong man?
Alienated from his colleagues and with a growing rift in his marriage, March receives messages from the killer. The bodies pile up, the pressure builds, and the violence reaches too close to home. Up against an unfathomable evil, March struggles against the clock to understand the hidden message in the pattern of wounds. 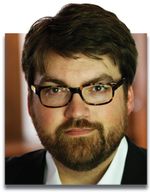 J. Mark Bertrand lived in Houston, where the series is set, for fifteen years, earning an MFA in Creative Writing at the University of Houston. But after one hurricane too many he left for South Dakota. Mark has been arrested for a crime he didn't commit, was the foreman of one hung jury and served on another that acquitted Vinnie Jones of assault. In 1972, he won an honorable mention in a child modeling contest, but pursued writing instead

MY REVIEW
I really admire Christian writers who write mystery/suspense. J. Mark Bertrand is one of the best. I love his Roland March series. His imagination is amazing. Where does he come up with all of these ideas?
Roland March is a guy that is very human and he makes mistakes and learns from his mistakes. He is just like a regular person. It seems like most of the police force is against him, but he always stays with his convictions and it works out in the end.
This was quite a grisly murder, but extremely interesting. You will see how the author lets you believe the different suspects may be the murderer. As soon as he introduced the real murderer I knew it was that person, not that it seemed obvious. I always try to guess the murderer and sometimes I guess right.
I like the way Roland and his wife have troubles, but they still love each other. They may have disagreements, but always try to work it out or discuss it.
It was very easy to get involved in this story and it was hard to put down. I really like it.
If you like suspense/mystery books this book is a great keeper. I recommend it highly.