The Grace Card DVD-Review and GIVEAWAY

WITNESS THE POWER OF FORGIVENESS 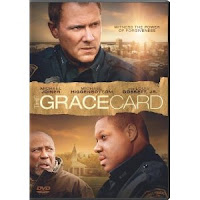 Everything can change in an instant ... and take a lifetime to unravel.
When Mac McDonald loses his son in an accident, the ensuing 17 years of bitterness and pain erodes his love for his family and leaves him angry with God ... and just about everyone else.
Mac's rage stonewalls his career in the police department and makes for a combustible situation when he's partnered with Sam Wright, a rising star on the force who happens to be a part-time pastor and a loving family man.
Mac's home life is as frightening as anything he encounters on the streets of Memphis. Money is tight and emotions run high as he constantly argues with his wife and his surviving son Blake, who is hanging with the wrong crowd and in danger of flunking out of school.
Sam Wright also never expected to be a police officer. He has a calling—to be a minister like his Grandpa George. But leading a small, start-up church doesn't always put enough food on the table for a young family, so Sam doubles as a police officer. With his new promotion to Sergeant, Sam starts questioning if his real calling might actually be police work rather than the pastorate.
Can Mac and Sam somehow join forces to help one another when it's impossible for either of them to look past their differences—especially the most obvious one?
Every day, we have the opportunity to rebuild relationships and heal deep wounds by extending and receiving God's grace. Offer THE GRACE CARD ... and never underestimate the power of God's love. 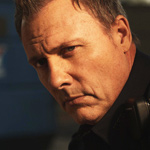 Michael Joiner (Mac McDonald)
Actor and comedian Michael Joiner began his career in Hollywood in 1986 and he has been based in Kansas City since 1994. While the role of Mac in THE GRACE CARD is a dramatic one, Michael is best known as one of the nation's funniest "clean" comedians. He has been called, "One of the funniest, most original standup comedians working today," by TV Guide. In addition to appearing in major comedy clubs across the country, Michael has written for "The Tonight Show with Jay Leno." He has also appeared in various film, television, and commercial roles.
Michael also wrote, directed, and starred in a short film, Thanks for the Ride, which he refers to as a horror comedy. He is currently working on a number of television and film scripts that he hopes to produce, direct, and star in. Michael and his wife are the proud parents of three sons 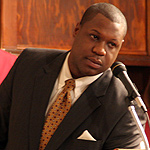 Michael Higgenbottom (Sam Wright)
Michael Higgenbottom is an accomplished theater and commercial acting performer in Memphis. THE GRACE CARD is his first film and he costars with Michael Joiner and Louis Gossett Jr. Michael, who is also an aspiring poet and author, currently works in the aviation industry.
A Chicago native, Michael began pursuing his dream of acting after moving to Memphis in 2000. An alumni of Knoxville College and the University of Memphis, Michael is a twin, has a set of younger twin brothers, his twin sister has twins, and his grandmother had five sets of twins! Michael has ... no children. 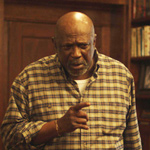 Louis Gossett Jr. (George Wright)
Louis Gossett Jr., whose stellar career has endeared him to fans worldwide, is one of a select group of actors to win both an Academy Award and an Emmy Award. He is best known for his Academy Award-winning performance in the film classic, An Officer and a Gentleman and an Emmy for his role as Fiddler in the historic TV miniseries "Roots."
Louis appeared in his first Broadway role ("Take A Giant Step") in 1953 when he was just 16 years old. Among his other well-known productions: A Raisin in the Sun, The Deep, and countless guest-starring roles on popular television programs through the decades.
In 2006, Louis decided to focus his energies on fighting social ills when he founded The Eracism Foundation, a nonprofit organization designed to create a "conscious offensive against racism, violence and ignorance." Toward that end, the foundation has created programs focused on youth mentoring, anti-gang violence initiatives, and diversity sensitivity training sessions known as Shamba Centers.
His recently released autobiography is aptly entitled, An Actor and a Gentleman. Learn more at his website

MY REVIEW
WOW, this DVD is amazing. Most Christian movies I have viewed have been greatly lacking in their acting abilities.
The Grace Card is really different. This movie proves great actors and stories can come from the Christian community.
Besides the acting, the story itself is a winner. It is a very touching, emotional movie that will bring tears to your eyes.
The Grace Card is full of hurting, blame, loss, forgiveness and sacrifice.
The main story is when someone does something against you, you will forgive them and love them even if they don’t ask-that’s The Grace Card.
My three youngest children 17, 18 and 20 watched it and approved it. They are hard to please, but have really loved it and will watch it again.
The end of this movie is so fantastic and amazing you will be brought to tears.
I give this the highest rating possible. A must see movie!

I will be giving away one DVD of The Grace Card to one very fortunate follower. Here is what you need to do to be included in the drawing.
Leave a comment with your name and email address. You will not be entered unless you leave a comment AND your email address.


Contest is only open in the U.S. and void where prohibited. Chances of winning are based on the number of entries and winner is draw from a non-biased third party- Random.org. ENTRY DEADLINE September 10, 2011

Thank you so much for the chance to win this. This looks great. I would love to watch this. Thanks again.

I am a facebook follower and would be thrilled to win this dvd.

I am an email subscriber and would love to win this dvd.

I am a facebook follower and would love to have this dvd in my collection. Forgot to leave my email address in the first post.

I am also a FB follower.

Oh, Trinity! I'd love to win this fantastic sounding movie! Thanks so much for offering it. Great review. You do a splendid job reviewing.

i would love to watch this fabulous dvd...thanks foar the chance.

i would love to watch this fabulous dvd...thanks foar the chance.

Thanks for the chance to win this movie.
I am anxious to watch it.
Charlotte Kay
charlovesmark at gmail dot com

What a delightful giveaway. I believe in the power of forgiveness and would enjoy watching this movie
with my family...
Many thanks, Cindi
jchoppes[at]hotmail[dot]com

I follow your blog via Google
Friend Connect...windycindy
Again, many thanks to you!
Cindi
jchoppes[at]hotmail[dot]com

Also, I am an email subscriber of
yours.
Merci, Cindi
jchoppes[at]hotmail[dot]com

so amazing many thanks!

oh, love to win this movie thanks

I would love to see this movie! thank you for the opportunity to win.

I'm a new follower. I came over from Laura Frantz's blog :)

I'm a follower, and I'd love to win this.

laura4him@bellsouth.net
Thanks for the giveaway!
Laura

Hi. Loved reading your review. This is a must see movie by everyone. I would love an opportunity to share it. Blessings, Connie Sue

TY for this opp, love your page, and review of the grace card. I heard it was an excellent movie and can't wait to it myself