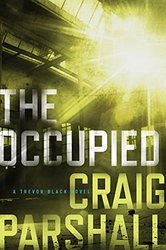 ABOUT THE OCCUPIED
As a youth, Trevor Black unleashed spiritual forces he couldn’t comprehend. Years later, Trevor is a high-flying criminal defense lawyer in New York City, with a six-figure Aston Martin and a trophy wife. But in an extraordinary turn of events, he receives a burdensome gift: the ability to perceive the invisible. And the dark forces he now sees are all gunning for him.

When one of Trevor’s hometown friends is murdered, the MO is eerily similar to a shocking trail of murders that have already crossed the lawyer’s path. So Trevor must return home to find the killer. . . and face not only his own personal demons, but supernatural ones as well.

ABOUT THE AUTHOR
As a New York Times Best Selling fiction writer, Craig Parshall has authored or co-authored 11 suspense novels. His novels have been translated into multiple languages and have drawn high praise from the likes of veteran Hollywood filmmakers and producers Ken Wales and Phil Cooke, Publishers Weekly, and on his military thrillers, stellar marks from Lt. Col. Robert "Buzz" Patterson, USAF (retired) who carried the "nuclear football" for the President of the United States. In addition to his work as a novelist and magazine columnist, Craig is a constitutional lawyer and Washington insider who serves as Special Counsel to the American Center for Law & Justice. Craig has testified multiple times on civil liberty issues before committees of both the U.S. Senate and the House of Representatives and before the Federal Communications Commission regarding the future of American media, and has represented clients before the U.S. Supreme Court. He speaks across the nation on issues of free speech and religious liberty, faith, culture & creativity, and law, and was the founding director of a groundbreaking effort to develop a First Amendment paradigm for Internet-based social media and communication platforms. Craig is married to nationally syndicated radio talk-show host Janet Parshall.

MY REVIEW
The Occupied by Craig Parshall is an excellent novel. This is the first time I’ve read a book by Craig Parshall and I’m really glad I’ve gotten the chance to find out what an brilliant author he is.
In The Occupied Trevor Black can see the invisible world of dark forces, but I believe he also sees angels. You may think this is completely fiction, but I know a man that can see demons on a person or in them. It is something that really happens.
Trevor starts out on the bad side, but so many things happen to him and a person he knows witnesses to him that Trevor knows he can’t make it on his own. So he accepts Jesus into his life. Now the dark forces are extremely mad and they try to kill him several times.
The strange happenings continue and go back to his hometown. Trevor wants to solve one of his best friends murder.
This is a supernatural murder mystery. Very entertaining and suspenseful. I like to find how the title fits into the book and The Occupied really works. I love the title and the whole novel. Excellent book. I highly recommend this novel.