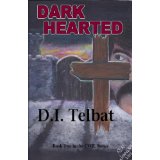 ABOUT DARK HEARTED
“Dark Hearted, the second book in D.I. Telbat's COIL Series, ranks right along with the first...captivating from the beginning... Whether bringing you to tears or keeping you on the edge of your seat, each chapter will have you breathless for more.”—Allison H., U.S.

"Dark Hearted…is what I would consider the perfect suspense book…this is book two of what looks to be a great Christian influenced series. What makes a book great is the amount of involvement the reader has with the characters…a fast paced book with adventure on every page so much better than a movie."—Marsha Randolph (read full review at No Wayz Tired, http://marsharandolph.wordpress.com/)

Dark Hearted, Book Two of the COIL Series by D.I. Telbat, continues with the suspense that began in book one, Dark Liaison, A Christian Suspense Novel.

The Commission of International Laborers' mission is interrupted, and they are once again targeted by a dark enemy bent on hatred and racism. COIL founder, Corban Dowler, has developed commando-style teams, using non-lethal weapons, to extract threatened servants of the Lord from danger zones worldwide. Corban now musters all of his resources to search for his abducted operatives, and hopes to stop the evil intentions of the one they know as Abaddon.

A biochemical weapon is about to change the world, and COIL may be the catalyst—unless their brazen courage and boldness in Christ can change the tide. Where death seems indestructible, Corban Dowler's operatives carry God's love and determination into the midst of the darkness.

Encrypted data finds its way to Corban from Karol Ngolsk in Romania, offering a glimmer of hope. Corban then leads the COIL team through a maze of intrigue and surprises, abductions and persecution, joy and sorrow, love and death—from the grim forests of Europe, to the blistering desert of Africa. Though killing is not COIL's way, the dark hearted one has no such qualms…

Dark Hearted by D.I. Telbat, cover art by Sean Johnson, a 75,000-word Christian fiction, action-suspense novel, continues the adventure as COIL carries on with the Lord's work to protect and rescue His people. And we learn again that…there is no redemption without sacrifice.

ABOUT THE AUTHOR
David I. Telbat is a Christian author who writes in many genres, but especially Christian action-adventure, espionage, and suspense. For his writing, David draws from his experiences in travel, athletics, sportsmanship, the church, and family. David wrote his first novel at age 14, and hasn't stopped since!

Telbat's Tablet, David's website (http://ditelbat.com), offers free weekly Christian action, adventure, and suspense short stories to entertain. He also shares his author reflections, occasional writing tips, and a list of his publishing credits and honors. The credits include both print and digital publications, anthologies, and a 2nd place People's Choice Award with print magazine, The Storyteller.

D.I. Telbat's novel, Dark Liaison, Book One in the COIL Series, is available as a Kindle book from Amazon.com, Amazon.co.uk, and from other retailers (soon). His newest suspense novella, Jaguar Dusk, is now serialized and is being posted as free weekly chapters from his Telbat's Tablet site.

Getting into trouble with the law as a young man became a turning point in David's life. The Lord used that experience to draw David into a personal relationship with Him. Re-focusing his life for Christ, David now seeks to honor God with his life and his writing.

Because of his interest in the Persecuted Church and Christian missions, many of D.I. Telbat's stories are about persecuted Christians, their hardships, and their sacrifice to serve the Lord. Several of his novels include battles in the spiritual realm, as well as espionage.
http://ditelbat.com/


MY REVIEW
Dark Hearted, the second book in D.I. Telbat's COIL Series is just as fantastic as book one. I love the mystery and intrigue involved in this story.
We got to meet some new characters and revisit some old from book one. The descriptions of people and places are just fantastic. I love how they describe and talk about the guns.
There were only a few things in this book that I didn’t like, but hate to mention them because this book is so very interesting and  full of suspense that I want everyone to read it. I feel I must say it though. To me I didn’t think it was believable that the group was working on a very important time involving case, but just because of a delay in the plans they went off to another country to help out some Christians for a few days.
The only other thing I didn’t believe was that the COIL group let a reporter come along and help out the group. She could have been a spy or gotten them in serious trouble. Also she had some experience, but not enough to let her into the group. That is only my way of thinking.
All in all I love this book. Dark Hearted is full of all kinds of tension and dangers and keeps you reading and wishing for more. Another wonderful book to read and read again. Highly recommended.


Thank you to the  Author/Publicist  for providing this book for review. I was not required to write a positive review. The opinions I have expressed are my own. I am disclosing this in accordance with the Federal Trade Commission's 16 CFR, Part 255