The Breakthrough by Jerry B. Jenkins*A Review* 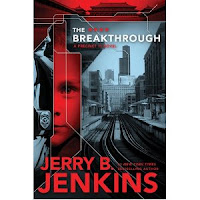 Publication Date: September 1, 2012 | Series: Precinct 11
As the youngest bureau chief and head of the Chicago Police Department's Major Case Squad, Boone Drake seems to have it all under control. Only those closest to him know that just a few short years ago, he lost everything that mattered to him in a tragic accident. After years of healing, his life is back on track. He recently married a wonderful woman named Haeley, adopted her son, bought a beautiful home, and rediscovered his faith. But Boone can't fight the feeling that something is about to go terribly wrong . . . again.

When an all-too-personal case takes Boone to Beijing at a time when Haeley can least afford to let him go, Boone is forced to make a difficult choice. There he becomes enmeshed in a dangerous human-trafficking ring that takes him through the famed Hutong District's narrow streets, alleys, and hovels. Teamed with a former Liberation Army officer, Boone has one chance to pull off an elaborate sting and rescue a young boy before he disappears forever.

Dr. Jerry B. Jenkins, former vice president for publishing and currently writer-at-large for the Moody Bible Institute of Chicago, is the author of more than 160 books, including the 63,000,000-selling Left Behind series.

Also the former editor of Moody Magazine, Dr. Jenkins's writing has appeared in Time, Reader's Digest, Parade, Guideposts, and dozens of Christian periodicals. Jerry and Dr. Tim LaHaye were profiled in a May 24, 2004 cover story in Newsweek magazine entitled "The New Prophets of Revelation."

Jenkins also assisted Dr. Billy Graham with his memoirs, Just As I Am, also a New York Times bestseller.

MY REVIEW
Another winning book by Jerry B. Jenkins. The Breakthrough is the third book in the A Precinct 11 novel series. It seems to me each book Jerry writes is better than the one before.
I just love police books and this one is one of the best.
The characters and settings are so well described it just seems like you are right there.
Just when things started to look good for Boone and his personal life and career are back on top several things go wrong. Not the normal little set backs most of us have, but drastic and devastating things. Will Boone stay strong in his faith; will he keep fighting for the good?
I love the scenes of the police work and how they find things out, how every clue means something and how even the wisest people can be tricked into believing things. Also what I love about this book is the fight to never give up and how love for someone makes us go the extra mile or more.
The Breakthrough is full of action, love and compassion. Not one scene drags and you will be staying up late to finish it. One part in the book is so very touching that I would have cried if I weren’t in the break room at work surrounded by lots of people.
I highly recommend The Breakthrough by Jerry B. Jenkins for everyone.