ABOUT STUART BRANNON'S  FINAL SHOT
In 1905, at age 58, legendary lawman Stuart Brannon — now a rancher and widower — had no intention of leaving his beloved Arizona Territory to attend the Lewis and Clark Centennial Exposition in Oregon, nor to participate in a celebrity golf tournament. His life no longer consisted of men to track down . . . people trying to kill him . . .gangs preying on the innocent. Then the telegram came: Stuart, I need you in Portland. Tim Wiseman is missing. I think there’s a cover-up going on . . . I’ll contact you there. T.R. How could he refuse a request from the President of the United States? 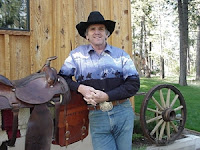 Stephen Bly (August 17, 1944 – June 9, 2011) authored 106 books and hundreds of articles and short stories. His book, The Long Trail Home (Broadman & Holman), won the prestigious 2002 Christy Award for excellence in Christian fiction in the category western novel. Three other books, Picture Rock (Crossway Books), The Outlaw’s Twin Sister (Crossway Books), and Last of the Texas Camp (Broadman & Holman), were Christy Award finalists. He spoke at colleges, churches, camps and conferences across the U.S. and Canada. He was the pastor of Winchester Community Church, and served as mayor of Winchester, Idaho (2000-2007). He spoke on numerous television and radio programs, including Dr. James Dobson’s Focus on the Family. He was an Active Member of the Western Writers of America. Steve graduated summa cum laude in Philosophy from Fresno State University and received a M.Div from Fuller Theological Seminary. The Blys have three sons: Russell (married to Lois) and father of Zachary and Miranda (married to Chris Ross) and mother of Alayah; Michael (married to Michelle); and Aaron (married to Rina Joye) and father of Keaton and Deckard. A third generation westerner, Steve spent his early years working on California farms owned by his father and an uncle.

Janet Chester Bly has authored and co-authored with Stephen Bly thirty nonfiction and fiction books, including Awakening Your Sense of Wonder, Hope Lives Here, The Heart of a Runaway, The Hidden West Series and The Carson City Chronicles. She lives at 4,000 ft. elev. in Winchester, Idaho. Find out more at http://www.blybooks.com/ or http://www.blybooks.blogspot.com/

Russell Bly is married to Lois, father of Zachary and Miranda (married to Chris Ross), and grandfather of 1-year-old Alayah. He is manager of Deranleau’s department store in Moscow, Idaho.

Michael Bly is married to Michelle and is Director of Business Operations for Inland Cellular in Lewiston, Idaho.

MY REVIEW
Stuart Brannon's  Final Shot by Stephen Bly with Janet, Russell, Michael and Aaron Bly is such a fantastic book. I love it, but I must say it was hard for me to read because it is the last work of Stephen Bly. I’ve been a fan of Stephen and Janet’s for many years. I joined their Yahoo group before there was a group on facebook, etc… So it saddened me to read this book, but also made me happy to have Stephen’s last work. In Stuart Brannon's  Final Shot only 7,000 words were written by Stephen Bly, just before his death, Janet, his dear wife and three sons got together and completed the final book Thanks for doing that Janet and sons. It was put together so well that the scenes and words flow very smoothly.
The characters were some of the ones from other books of Stephen’s that we loved or hated for years. These characters are strong and very descriptive. The scenes and action were very well written and had me on the edge of my seat.
I love how Stuart still does the right thing even in the most horrible circumstances. How he believes what the Lord says and goes by the Code of the West.
I highly recommend this fantastic book. It will end up on your book shelf for sure. A western full of action, adventure, close calls, humor and even romance. A 5-star book and one to be loved.

Thank you to the Author/Publicist for providing this book for review. I was not required to write a positive review. The opinions I have expressed are my own. I am disclosing this in accordance with the Federal Trade Commission's 16 CFR, Part 255

Greetings, Wanda: Thank you so very much for featuring Stuart Brannon's Final Shot and for your review. Greatly appreciated!
Blessings,
Janet Chester Bly