Be Fearless: Change Your Life in 28 Days by Jonathan Alpert and Alisa Bowman * A Review 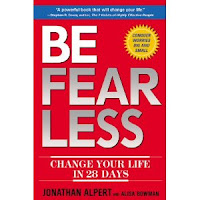 ABOUT Be Fearless: Change Your Life in 28 Days
Most people have something that gnaws at them at night, a mess or unrealized dream somewhere in their lives that causes them to feel stuck, out of control, overwhelmed, incomplete, and dissatisfied. They want to run away, back away, and ignore what they fear--whether it's a demanding boss, unsatisfying sex life, or distant love interest, but they can't. The fear finds them anyway. It's always there, and it's the source of all of their unhappiness. It's what lies behind every problem, and it's what stands between them and the lives they were meant to live. Psychotherapist Jonathan Alpert wants readers to know one thing: you can face your fear and create your ultimate life-and you can do it quickly. You can find your dream job. You can end that dead end relationship and get the love you want and deserve. You can overcome perfectionism, procrastination, panic, worry, rejection, failure, excuses and even the people in your life who keep telling you that you can't. You can turn your dreams into reality. You can find happiness, success and love. And you don't need years of therapy or even medications to do it.

BE FEARLESS is a 5 step plan that is guaranteed to transform the fearful into fearless. It's based on a revolutionary formula developed by Jonathan Alpert, and it's worked on countless patients whose amazing stories are told throughout the book. In as few as 3 weeks readers will transform their lives using the
5 step program:
Define Your Dream Life
Break Your Fear Pattern
Rewrite Your Inner Narrative
Eliminate Your Fear
Response Live Your Dream
By teaching readers to use fear to their advantage and take important risks BE FEARLESS will make the impossible possible.

ABOUT THE AUTHORS
  Jonathan Alpert is a licensed psychotherapist practicing in Manhattan and one of the media's favorite sources of no-nonsense lifestyle advice, quotes, and commentary. The New York Observer has called him "Manhattan's most media-friendly psychotherapist". His insight is regularly tapped by major national and international media outlets, including television, print, radio, and online. He appears on such nationally televised shows as The TODAY Show, Good Morning America, CNN, FOX and NBC Nightly News. Alpert appeared in the 2010 Oscar winning documentary "Inside Job" where he commented on the psychological underpinnings of the financial crisis and he has also been tapped to offer advice on reality TV, including TLC's "My Strange Addiction." His new book, "BE FEARLESS: Change Your Life in 28 Days" is being published by Hachette in April, 2012. The book is also gaining international attention as it is slated to be published in the UK, Germany, Spain, Portugal, Taiwan, Brazil, China, and Japan.   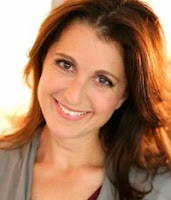 Alisa Bowman is a recovering divorce daydreamer and creator of ProjectHappilyEverAfter.com, which was voted one of the Top 10 Marriage Blogs of 2009. She has appeared on Discovery Health, FOX's Ask Dr. Manny Fox, the NBC 10! Show, Better TV, and many others. She has been interviewed by Redbook, First, Pregnancy, CNN.com, Woman's World, iParenting.com, and many other outlets.


MY REVIEW
Be Fearless change your life in 28 days is an interesting book, but I was looking for much more to be included in this book. I thought it might have a Christian view in it. I also didn’t care for how long the authors took to get into the main part of the book. The whole first half was telling about their problems and the problems of others.
The parts I liked about the book were some of the things they said like “If you retreat, the fear grows stronger. If you face it, the fear grows weaker.” Which is very true. Most all of the points in this book are common sense and most people could figure them out themselves, but I suppose it would help the people that just don’t think that way. I also like where they say “Focus on what you have control over, not on what’s beyond it.”
Be Fearless has helped me in a few ways like getting me to think about how I feel about different situations. One part that is very important it says “One bad reference in the past gets transferred onto all new experiences, causing fear that can last for years.” That has happened to me. Where so many times nothing bad happens in situations and then you have one time that something bad happens and your mind keeps replaying that one area.
I think the author, which is a psychotherapist would be great to go to, but this book just doesn’t cut it for me. Maybe some people do better with reading about things, but I need the face to face meetings. I really wouldn’t recommend this book.

I received my free copy from Sarah Reck at Center Street/HachetteBookGroup, for my review. I was not required to write a positive review. The opinions I have expressed are my own. I am disclosing this in accordance with the Federal Trade Commission's 16 CFR, Part 255