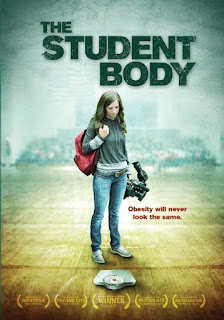 When a brave high school student takes a stand against state-mandated BMI tests of her peers, she finds herself in the middle of a heated national controversy, sparking a battle of wills between herself and government officials.


ABOUT THE STUDENT BODY
This true story really shows us how we can be cruel without even meaning to. The Student Body tells the story of two girls fighting against bullying and the government insincerity while investigating the problem of childhood obesity.
Different schools made the children get weighed and then they find out what there BMI is So if don’t fit within the numbers there were sent a letter saying they were not without certain numbers and essentially told they were fat.
I think this is very unfair as children and young adults are at a stage when they think everything about themselves is wrong. They think they are to fat, to skinny, their hair is to straight or to curly etc… Now to put this on them is just to much.
One of the girls is a journalist major and made this film documentary to try to get to the bottom of why the children were sent letters. She also tried numerous times to talk to her senator and he wouldn’t talk to her. She tried emails, phone calls, tried to see him at a rally. Then she went to his office and confronted him face to face.
This is quite an excellent documentary and I recommend it for each and every one.  It kept me very interested and it will show you if you don’t give up you will get answers to your questions.