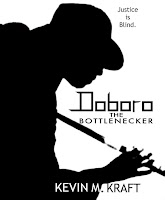 ABOUT DOBORO THE BOTTLENECKER
Dave Granger took the wrong job with a bad man.
That mistake cost him the life of his wife and daughter and nearly his own.
Rendered crippled and blinded, he was spirited away to distant South Korea for his own sake, where he underwent seven years of extraordinary physical and personal rehabilitation under both the harsh tutelage of a martial arts master and the God of his youth.
Now…seven years later, he is back in the states as a wandering street musician—a brand new man with a brand new name. And with his new lease on life, a new mission: to anonymously protect his daughter, whom he had assumed dead, from the malevolent forces that soon resurface with his appearance to finish the job they attempted seven years ago. His skills are remarkable. But he’s only human. And his love for his little girl could very well be the thing that finally dooms them both, unless he can summon strength beyond himself, to finally confront the threat against them.
And that is only the beginning. 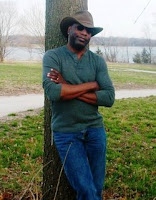 ABOUT THE AUTHOR
Kevin M. Kraft is an award-winning author and screenwriter, as well as a singer-songwriter, cigar box guitar guru (and founder of the annual Kansas City Cigar Box Guitar Festival), actor, motion picture director and producer in Kansas City, Missouri, where he currently resides with his wife and children, for whom, despite all he does, he still makes plenty of time for.

A lover of great storytelling and an avid writer from a very young age, inspired by Ray Bradbury, Kraft was always displayed a penchant for "effective" and "visual"writing, getting the attention of teachers and fellow classman alike. Later, after forays into short stories, novelettes and novellas, he tried his hand a screenwriter, which was a perfect fit to his visual bent. His second screenplay, TOPWORLD, won a number of screenwriting awards and Kraft continued to writes script, enjoying the real-time screen format, before return again to writing novels.

Mr. Kraft enjoys getting feedback from readers and welcomes you to do so either here on Lulu or at his official website.

Incidentally, Kraft has been working hard at bringing MOMO to the big screen, lacking only the funding thus far to do so

MY REVIEW
This is the second book I have read of Kevin M. Kraft and I must say it is just amazing. I read MOMO  and loved it also.
In this book you will see how every decision you make will bring about consequences. Be it bad or good.
David Granger took a job that with a man that was bad and he didn’t know it at the time, but he lost his wife, daughter and almost died.
He was taken to South Korea blind and crippled.  For seven years he was under great pain in the physical and personal sense. David was taught under a martial arts master and he never gave up on God. The martial arts master was very hard on him, but it had to be that way.  Without the harshness David might have just given up.
David then comes back to the U.S. and finds out his daughter is alive, but doesn’t remember him. He feels he must protect her.
This book is full of suspense, adventure, struggling and most of all hope and love. The spirit that is in David is one to never give up. It really is amazing at how he learns so many different things and how he takes care of himself. I would love to see a book two. I just loved reading it. You won’t be able to put this book down and when you come to the end you will want it to keep going.  I love the name of this book and what it means.
Highly recommend this wonderful book.