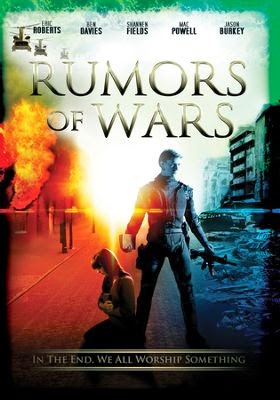 ABOUT RUMORS OF WARS
Rumors of Wars is a suspenseful, action packed film with two converging story-lines, the first one centering around an aspiring college journalist named Roxy (Jennifer Cooper), finds herself searching for answers when she investigates end time prophecies for a term paper. Recording her research in a diary, her findings prove to have more of an impact than she could have ever imagined. Her diary is discovered years later, in the rubble of a post apocalypse society filled with decay and violence. With the truth of what really happened to the world in its pages, the book finds its way into to the hands of an officer, named Shaw (Ben Davies) in the New World Army. But what will he do with this new found truth?

MY REVIEW
Rumors of Wars is a really interesting, suspenseful drama. I like how they show two different stories. One shows a college student and how she keeps a diary of the events happening in her life and how she tries to escape from the people forcing a chip into her hand. She studies about the end times and writes everything down.
The second story is happens years later. It tells of all of the mayhem and trouble with the end times. How Christians are captured and killed. How no one wants the Christians around. They blame all of the troubles of the modern age on the Christians. One solider finds her diary and reads it. It’s amazing what a few words can do to a person.
Quite a good movie that will start you thinking and make you want to change for the better. Very good end times story. I recommend this for all groups.