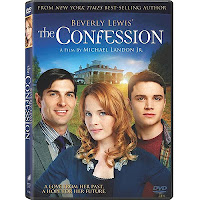 ABOUT THE CONFESSION
Raised by an Amish family, Katie Lapp (Katie Leclerc, TV's "Switched at Birth") starts a quest to find her birth-mother, Laura Mayfield-Bennett (Sherry Stringfield, TV's "ER"). Along the way, two very different men try to help her overcome a devious scheme to steal her rightful inheritance and divide her heart between two worlds.

Katie Leclerc grew up in Lakewood, Colorado, the youngest of three siblings in a close-knit family. In grade school, her spunky personality and megawatt smile won her the lead role in a production of Annie. It was in this play that she discovered her passion for acting, while juggling other after-school activities such as basketball, choir and dance. When her family moved to San Diego, Leclerc continued to pursue theatre at Valley Center High. She started booking commercials including Pepsi, Cingular, Comcast and GE. Then she got her first big break, a role on the cult favorite TV show, “Veronica Mars,” starring Kristen Bell.

Currently Leclerc stars in the hit ABC Family show "Switched at Birth." Her other TV credits include "CSI," “The Riches,” “The Ex-List” and “The Hard Times of RJ Berger.” She also starred in the feature films “The Inner Circle” and “Flying By,” with Billy Ray Cyrus as well as the independent film "Mesmerized." At home Leclerc can often be found hiking on one of L.A.’s hidden trails.

Versatility, discipline and a solid work ethic have been the underpinnings of Adrian Paul’s very successful 24-year acting career. With over twenty-five films and two hundred hours of television experience, it can be said Paul has successfully taken on a rich diversity of roles.

During the past four years, in between spending time in Europe developing his own production company and running his charity the Peace Fund, Paul has also been starring and co-starring in films such as “The Heavy,” “Eyeborgs,” “Nine Miles Down,” “Deadly Descent” and “Cold Fusion.”

Paul is set to direct his first feature in 2013, is developing a mini-series based in 1850s Louisiana and in December 2012 launched his own radio show called Peace Fund Radio. The focus being on charitable work around the world, highlighting notable celebrity guests linked to charitable organizations of their own, as well as showcasing the Peace Fund’s Charitable partners worldwide.

Having worked in film, television and theater, and now radio, in both Europe and America, Paul is now recognized in countries all over the world.

MY REVIEW
The Confession written by Beverly Lewis made into a DVD is excellent. I was quite intrigued by how this second movie in the series kept my interest and how it turned out.
The actors did a wonderful job and the settings were marvelous. I loved the mansion Laura lived in and the sounding grounds.
I like how Katie was pushed into being a servant in her mother’s house and how she was sweet and loving about it.
This is a wholesome family movie that will be fantastic for a family night. It teaches many lessons and like the DVD covers says The Confession is “A touching story of deceit, trust and love.”
I would highly recommend this DVD to everyone. If you love Amish stories and good movies this one is for you. I love the way it ended, but I know a third one will be coming out and I look forward to that.