The Icecutter's Daughter by Tracie Peterson * A Review

ABOUT THE ICECUTTER'S DAUGHTER
Merrill Krause longs for a family of her own, but she's bound by a promise to her dying mother to care for her father and older brothers until they no longer need her. She enjoys being part of the family business, harvesting ice during the brutal Minnesota winters. Merrill actively takes part, possessing a keen ability to work with the horses--despite the advice of her good friend, who disapproves of her unladylike behavior.

When Rurik Jorgenson arrives in their small town to join his uncle doing carpentry, he soon crosses paths with Merrill. But unlike other men, who are often frightened away by her older brothers, Rurik isn't intimidated by them or by Merrill's strength and lack of femininity. As he thrives under the mentorship of his uncle, Rurik dreams of inheriting the business and claiming Merrill as his wife. But while he is determined to start a new life, the past is determined to follow him when his former fiancee and her brother show up in town. Soon Rurik is put in the center of a major scandal that may damage his relationship with Merrill. Can they learn to trust God--and each other--and embrace the promise of love? 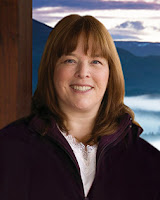 ABOUT THE AUTHOR
Tracie Peterson is the bestselling, award-winning author of more than eighty-five novels. Tracie also teaches writing workshops at a variety of conferences on subjects such as inspirational romance and historical research. She and her family live in Montana.


MY REVIEW
I really enjoyed Tracie Peterson’s book The Icecutter’s Daughter. The Icecutter’s Daughter is in the series Land of Shining Water. This series is set in Minnesota in the late 1800’s.
This book is fascinating and I love Merrill her father and all of her brothers. How they protect her even when she doesn’t want the protection or help they offer. Merrill and Rurik meet and hit if off. Rurik likes the way she paints on her cupboards and asks her if she would like to paint some furniture that he makes. So they start work on the furniture.
Shortly Rurik’s ex fiancee shows up and claims they are getting married no matter what Rurik says and has some reason that will make him marry her.
This is an intriguing story full of laughter, love and suspense. I enjoyed it greatly and would recommend you read it.
There was only one thing I think should have been different in this book and that after the main plot of the story it keeps going. The suspense is gone and I think it falls flat. Anyway it is still worth a read.

Thank you to Bethany House for providing this book for review. I was not required to write a positive review. The opinions I have expressed are my own. I am disclosing this in accordance with the Federal Trade Commission's 16 CFR, Part 255