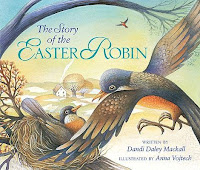 ABOUT THE STORY OF THE EASTER ROBIN
In the center of the nest lay one perfect egg, the color of a spring sky. The father robin sat on a branch nearby, guarding his family. Tressa spotted raccoon tracks below and a blue jay eyeing the nest. 'Gran, how are we going to keep the egg safe?' 'We'll have to leave that one to the Creator,' Gran said. Robins have built a nest on the window ledge at Grandmother's house! Tressa is thrilled---and concerned. What will happen to the sky-blue egg laid by the mother robin? As more eggs appear, Tressa witnesses the daily drama of the robins' nest and learns how God cares for all creatures. Besides watching the birds, there are Easter eggs to color. And there is a very special story to hear---a tale of long ago about one small bird with a very big heart. How did the robin get its red breast? Tressa is about to find out as Gran tells her the story of the Easter robin. Brought to life with colorful, tender illustrations, The Story of the Easter Robin will captivate and teach your child about compassion and faith.

 ABOUT DANDI DALEY MACKALL
Dandi won her first writing contest as a 10-year-old tomboy. Her 50 words on "Why I Want to Be Batboy for the Kansas City A's" won first place, but the team wouldn't let a girl be batboy. It was her first taste of rejection.
Since then, Dandi Daley Mackall has become an award-winning author of over 400 books for children of all ages, with sales of 4 million copies in 22 countries. Recent picture books with Sleeping Bear Press include Legend of Ohio, Rudy Rides the Rails: A Depression Era Story (Notable Book 2008 - Notable Social Studies Trade Book for Young People National Council of Social Studies & Children's Book Council; winner of the Angel Award, 2008; Winner of the "Award of Excellence" from Chicago Book Show 2007) and 2008 release, A Girl Named Dan (her own "batboy" story, and a lesson on Title IX), 2 Mom's Choice Awards & Amelia Bloom Award. Eva Underground, Harcourt young adult novel, nominated ALA Best Book 2007, starred Kirkus review, awarded a Top Teen Read by New York Public Library, finalist for Ohioana Award, was based on the author's experiences behind the Iron Curtain. Love Rules was awarded Romantic Times' Top Pick. Middle-grade fiction, Larger-than-Life Lara, Dutton/Penguin, which teaches how to write, while tackling the problem of bullying, is on the KY Bluegrass Award List 2007-8; William Allan White Award list, 2008-9; KS and KY Children's Choice lists. Her Winnie the Horse Gentler series has sold over half a million books and Starlight Animal Rescue is a Gold Medallion finalist. Dandi received the 2009 Helen Keating Ott Award for distinguished contribution toward promoting high moral and ethical values in children and young adult literature. She also received the Distinguished Alumna Award in 2008 from the University of Missouri. Dandi is a national speaker, keynoting at conferences and Young Author events, and has made dozens of appearances on TV, including ABC, NBC, and CBS. Visit Dandi at www.dandibooks.com,

MY REVIEW
The Story of the Easter Robin is such a sweet special story for children and adults alike. The story tells of how a Robin got her red breast. It takes you back to Jesus when He was beaten and carrying his cross and how a Robin was there and had compassion on Jesus.
This story tells of a girl who worries that the Robin’s eggs will freeze when it got really cold, but Gran said that the creator would take care of it and the eggs.
The legend of the Robin’s red breast is an old Pennsylvania Dutch tale. The illustrations in The Story of the Easter Robin are simply beautiful. The colors are bright and the people and animals are precious.
This book is for 4-year olds and up and is a very good story to read to all children. I recommend this sweet book.


Thank you to Zonderkidz for providing this book for review. I was not required to write a positive review. The opinions I have expressed are my own. I am disclosing this in accordance with the Federal Trade Commission's 16 CFR, Part 255