Downfall by Terri Blackstock 8 A Review 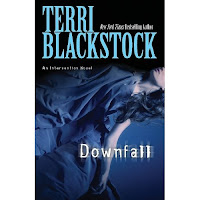 ABOUT DOWNFALL
Emily Covington has turned her life around after a drug addiction, but her family still has trouble trusting her. Though Emily has committed herself to a year-long treatment program and has been sober for almost a year beyond that, even her mother walks on eggshells around her, fearing she'll relapse. After her behavior during her drug years, Emily realizes she has a lot to prove. When police discover a homemade bomb under Emily's car, and she then learns the wife of one of her friends was murdered that same morning, she knows things are deadly serious. But who wants Emily dead? And why? A conversation she had with two men, an Alfred Hitchcock movie, and a plan for a double murder all conspire for one explosive ride ... and Emily is the only one who can identify the killer and save the life of the next potential victim. As she frantically works to solve this ever more complicated puzzle, Emily finds herself playing right into the killer's hands. 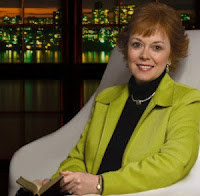  ABOUT THE AUTHOR
Terri Blackstock (www.terriblackstock.com) has sold six million books worldwide and is a New York Times bestseller. She is the award-winning author of Intervention and Double Minds, as well as such series as Cape Refuge, Newpointe 911, the SunCoast Chronicles, and the Restoration Series.


MY REVIEW
I’ve been following the Intervention Series since it came out. Downfall is the third and last book in the series and what an ending to the series. I loved it. This series shows and tells us how drug use really causes so much harm and how things escalate out of control. No one who takes that first drug ever thinks they will be a drug addict. It just leads to more and more bad decisions.
All of Terri Blackstock’s books are fantastic and Downfall is also.
The same compelling characters as the first two books with more sinister villains that will capture you right from the start.
Emily Covington is a young lady who has been a drug addict, but is now clean and has been that way for two years. She is trying to get her life back on track, but things keep happening and people start to doubt that she is recovered. Even the people closest to her have their doubts, but Emily keeps on.
I love action-packed stories and Downfall was exactly that and much more. The last ten chapters or so was fast-paced and breathtaking.
I also liked the continuing romance between Emily’s mom Barbara and a police detective Kent. It is really sweet and they have their problems, but I really think it is charming.
You will greatly enjoy Downfall and hear the concluding story of the Covington’s and how they put their faith and trust in the Lord.
Highly recommended for everyone. A keeper for sure.


Disclosure of Material Connection: I receive books free. I am not required to write a positive review. The opinions I express are my own. This is true of any book I review for any publisher or author; I will not review books where a positive review is required and I will always express my own opinions of each book received and read.

I can't believe I still haven't gotten around to reading one of Terri's books. I seriously need to!

She is an excellent author. You will love her books. My favorite books of hers are the Last Light series.

Thanks so much for the fabulous review. I appreciate it so much. You've made my day!

You are welcome Terri.
Your books make our day.

Great review! And nice that the author stopped by to read it too! Hey, wanted to let you know that we're talking about Terri's book on our new Facebook community, Christian Fiction. To celebrate the release of Downfall, we're giving away a Kindle Fire. Just stop by http://dld.bz/baqF8 and take the "Are You a Super Sleuth?" quiz, and you'll be entered in the drawing.