My Father at 100 by Ron Reagan*A Review 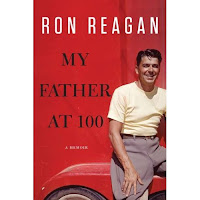 ABOUT MY FATHER AT 100 February 6, 2011, is the one hundredth anniversary of Ronald Reagan's birth. To mark the occasion, Ron Reagan has written My Father at 100, an intimate look at the life of his father-one of the most popular presidents in American history-told from the perspective of someone who knew Ronald Reagan better than any adviser, friend, or colleague. As he grew up under his father's watchful gaze, he observed the very qualities that made the future president a powerful leader. Yet for all of their shared experiences of horseback rides and touch football games, there was much that Ron never knew about his father's past, and in My Father at 100, he sets out to understand this beloved, if often enigmatic, figure who turned his early tribulations into a stunning political career. Since his death in 2004, President Reagan has been a galvanizing force that personifies the values of an older America and represents an important era in national history. Ron Reagan traces the sources of these values in his father's early years and offers a heartfelt portrait of a man and his country-and his personal memories of the president he knew as "Dad." Hardcover: 240 pages Publisher: Viking Adult; First Edition edition (January 18, 2011) Language: English ISBN-10: 0670022594 ISBN-13: 978-0670022595 Product Dimensions: 9.1 x 6.3 x 1.2 inches Shipping Weight: 1 pounds

ABOUT THE AUTHOR The son of President Ronald Reagan and First Lady Nancy Reagan. Formerly a dancer with the Joffrey Ballet, he has been a political commentator and cohost of MSNBC’s Connected: Coast to Coast, as well as host of The Ron Reagan Show on Air America Radio. He has written for numerous magazines, including Newsweek, Esquire and The New Yorker. He lives in Seattle with his wife, Doria. MY REVIEW The book My Father at 100 by Ron Reagan was an O.K. book. There is a lot of history about Ronald Reagan and his family. Ron said his father was loving and caring, but hard to get to know. The history of this book is correct, but I feel Ron didn’t really know and appreciate the President fully. A lot of this book was really boring and I didn’t care for it. I did truly enjoy the pictures of the Reagan family and learning about the days of President Reagan’s family. This book wasn’t a very good tribute to President Reagan. Ron Reagan shouldn’t have talked bad about his father after he was gone. So I don’t recommend this book, but if you want to read it borrow it. Order from Amazon Thanks to Viking / Penguin for the review copy of this book. I was not required to write a positive review. The opinions I have expressed are my own. I am disclosing this in accordance with the Federal Trade Commission's 16 CFR, Part 255